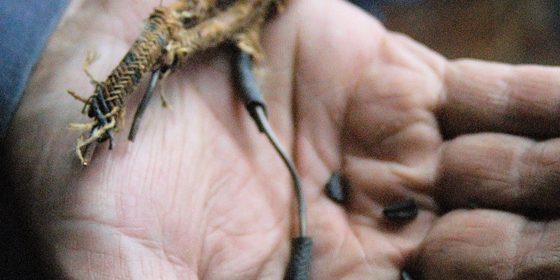 Larry Pyrz of Mr Did’s Custom Touch does a lot of rehab and electrical repair work in the Chicago area. We asked him to share a story about a job where he had to move or add switches.

“We have a lot of older homes in Chicago,” Larry began. “My biggest fear with electrical repair work is in houses built before the 1950s. They’ve got old cloth-covered wire with rubber insulation. The rubber insulator is brittle – move it the wrong way and it cracks.

“If the old wires are in bad shape, rewiring the house is the safest option,” he explained. “If the client doesn’t have the budget to rewire, then I’m proactive about it, I gently straighten out the wires and use shrink tubing over the top to hold it together. Honestly, the less you have to move and adjust wire, the better it is. Especially with the older stuff.”

Larry went on to describe a client with a challenging service request in an old home:

“Should I wire a four-way switch for these stairs?”

“This home had a front and back hall,” Larry described. “The lights in these halls were controlled with three-way switches at the front and back door.

“To turn these hall lights off, you’d have to go to the front or back door. She wanted to turn the lights on from the front, back, or the stairs in the middle of the hall. The location at the stairs was the problem.

“Should I have wired a four-way switch for the stairs? That would’ve required a lot of wiring in the walls and ceiling,” Larry said.

“You can’t see inside the wall.”

“If you’re adding or moving a switch, you’re opening yourself up to whatever old wiring is in that wall. You can visualize the circuit, draw it on paper even, but you can’t see inside the wall where the pipes go. What gets connected to what.”

Larry started searching for ways to do these switches without wire.

“I searched for ‘smart home products’ but didn’t like what I was seeing from people who make smart home stuff. Their receivers wouldn’t stick in a ceiling junction box. But Levven Controls would. This was just what I needed, so I bought some.”

Levven Controls switches send wireless on/off signals to one or more receivers. Receivers are installed in junction boxes to turn the fixtures on and off.

“A Levven Controls switch at the bottom of the stairs could control the front and back lights without getting into the walls and running new wire,” explained Larry.

“All I had to do was connect the Levven Controls receiver into the junction box and mount the switches on the wall. Simple. Time saving, cost saving. This saved a bunch of wiring in the ceiling and I didn’t have to worry about cracking the old cloth-covered wire.”

“My client got a great deal.”

“I was blown away by the simplicity and ease of use,” he enthused. “To do this job with wire, I would have quoted them 6-8 hours. Plus there’d be holes that would have had to be repaired and repainted. And I would’ve had to navigate through old wiring in the wall.

“It took less than an hour to do the Levven Controls switches. I invoiced two hours at $75 an hour. My client got a great deal and they loved the results.”

What’s your top concern when moving and adding switches?

Larry’s story illustrates some of the problems electricians encounter in older homes. Have you experienced similar issues?

Levven Controls welcomes electrical trades and distributors who want to:

Where To Purchase Levven Controls Switches

Use Levven Controls wire-free switches in your next project.